Children depict the difficulty for their parents.

In this tablet-top-pool game, parents shoot their egg into the nest. Children follow suit. But because their motoric skill are less developed, they may take more turns to get into the nest. Every time the child shoots its egg forward, small shells break. When the child’s egg reaches it’s destination, it is up to the parent to collect the left shells in the same amount of turns as the child left them. 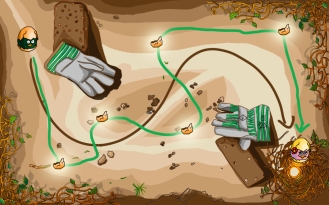